Triple flexion and extension is a key factor in both injury prevention and athletic performance. From flexed positions, sequential extension of the ankle, knee and hip joints allows for explosive force production resulting in greater athletic performance. Equally if these joints cannot move freely throughout their entire range of motion there is increased risk of injury, particularly for the closest proximal joint that is essentially being overused to make up for the lack of movement in other areas.

As triple flexion and extension is key in almost all sports, assessing movements or exercises that mimic these actions is common. Perhaps the most common assessment of triple flexion and extension and what is considered a fundamental movement is the Squat. Research from other movement screening has suggested that those with greater peak sagittal plane joint angles demonstrate improved squatting technique (Butler et al., 2010). Assessing the squat pattern can therefore give us an insight into an individual’s ability to effectively produce and transfer force in powerful sporting movements.

Squatting technique can be referenced to a number of different guidelines but generally the following technical recommendations are accepted.

– Maintenance of a constant torso to floor angle

– Chest being up and out

– Heels on the floor

– Alignment of the knees over the feet

With the upward phase of the squat being the extension of the hips and knees to a standing position with the same recommendations. In addition to this it is essential athletes maintain their centre of mass within their base of support while squatting, without maintaining this relationship the athlete will inevitably lose balance and fall over.

Our AMAT Performance system assesses the back squat including analysis of the centre of mass (balance), trunk and tibia angle in the sagittal plane (hip flexion, ankle flexion) and tibia angle in the front plane (knee valgus). This information coupled with an accurate and objective assessment of  their squat depth helps inform us on our athletes’ ability to triple flex and extend, and uncover any possible limitations to their technique.

See the video below for an example of our Back Squat test and analysis.

Core stability and pelvic control are integral in all athletic movements. Interactions of the lumbar spine, the pelvis, hips and surrounding musculature serve two primary functions:

The transition of force between the lower and upper body through the lumbo-pelvic hip complex is reliant on postural control and core stability. A lack of core stability means energy is not efficiently transferred to the distal segments of the body. This makes athletes more susceptible to injury due to compensations in movement to make up for a lack of force production (Oliver, 2010). To create this stability, the function of the trunk is to act at a stabiliser, preventing motion rather than initiating movement (McGill,2010). Therefore assessing an individual’s pelvic control is key to understanding the efficiency of the kinetic chain in their movements.

Core exercises often consist of isometric holds or stabilisation either with our without external resistance, with the prime goal of stabilising the spine in a neutral position and preventing movement (anti-rotation) in the spine that may increase the risk of injury. (Mendrin et al., 2016). These stabilisation exercises consist of anything that challenges spinal stability and forces trunk co-activation patterns, with the option to be loaded through a range of strategies including limb movements (Vera-Garcia et al., 2014). Research shows that movement involving travelling trunk exercises requiring pelvic control and core stabilisation, elicit greater muscle activation than static holds in a stationary position (Pyka et al., 2017). 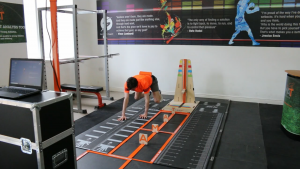 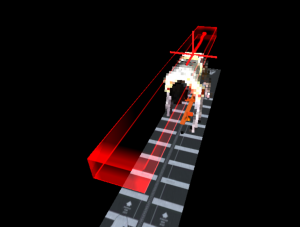 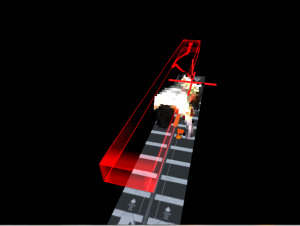 Our aim with the Bear Crawl test as part of our AMAT Performance system was to assess pelvic control, anti-rotation and stabilisation in a travelling pattern utilising reciprocal arm and leg movements that are common in most sporting actions. Athletes who display pelvic tilt will theoretically have less control of movement in their lumbar spine leading to excessive motion in the trunk and hips during movement. Our Bear Crawl assess pelvic movement in 3 planes of motion providing feedback on the athletes pelvic control, co-ordination and ability to maintain a stiff, stable trunk providing information on that may link to their ability to reduce spinal loading and transfer force effectively.

In sport single-leg activities are a common occurrence, athletes need to be able to dynamically control their body from unilateral positions that are common in most cyclical sporting movements (e.g. – running). Maintaining balance and a stable position is key to force transfer and avoiding postural sway. Postural sway or stability has been identified as a potential risk factor for lower extremity injury in various studies. Variations in postural stability have been associated with altered neuromuscular control and increased joint forces (Murphy et al., 2003). McGuine et al., (2006), showed that those with increased postural sway (and therefore reduced balance) had a sevenfold increase lower extremity injury. Similar findings have also been found in in female soccer athletes, with diminished balance linking to an increased risk of leg injury (Soderman et al., 2001).   For this reason, we feel postural control, balance and sway should be assessed with athletes.

Some common assessments of balance and postural sway are the Star Excursion Balance Test (SEBT) and the Y-Balance Test (YBT). The SEBT is a unilateral, functional joint stability task that incorporates a single-leg stance of one leg with a maximum targeted reach of the free leg (Thorpe and Ebersole, 2008). The Y-Balance screens dynamic balance requiring stance leg balance, with contralateral leg reaches in the anterior, posteromedial and posterolateral directions (Smith et al., 2015). These can be said to be tests of dynamic postural control as they challenge an individual to maintain a stable base of support during dynamic reaching movements (Gribble et al., 2003). Studies have reported that asymmetry in reaches of greater than 4cm are said to be linked to a potential increased risk of injury. Interestingly, some studies highlight similar findings – injury was only significantly associated with injury when the subjects were required to maintain balance when reaching in an anterior direction (Plisky et al., 2006, Smith et al., 2015).

In-house findings demonstrated to us that young athletes were most easily able to perform reaches in a sagittal plane of motion and also time-limiting factors would not be permissive to include reaches in multiple directions. Given this knowledge and experience and taking into consideration the findings of such research as above we included an anterior reach test in our AMAT Performance system.

Our Balance test requires the athlete to maintain their centre of mass, within their base of support during a single-leg stance and contralateral reach, whilst also maintaining anatomical alignment and avoiding poor movement patterns (e.g. – knee valgus).

Watch the video below for a demonstration of how the system assesses Balance.

During dynamic activities that commonly occur in sport such as running, jumping and changing direction, poor neuromuscular control has been highlighted as a key contributor to injury (Hewett et al., 2005). One aspect of poor neuromuscular control, “leg dominance” has been defined as an imbalance between the two lower extremities in strength, co-ordination and control (Myer et al., 2004). Imbalances of greater than 15% have been deemed as a key predictor of injury (Crosier and Crelaard, 2000). For this reason, screening our athletes for muscular imbalances has become the norm in an attempt to identify and correct any asymmetry. To screen for injury risk factors in terms of leg dominance, single leg hop assessments are recommended (Read et al., 2016). Single leg assessments may include single leg countermovement jumps, single leg squat jumps, single leg broad jumps, crossover hops, single leg hop for distance, triple hop for distance and more. These are valid due to the fact that dynamic multi-directional movement in sport is not always performed from bilateral positions (Hewit et al., 2012). 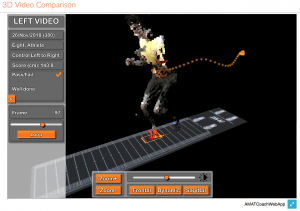 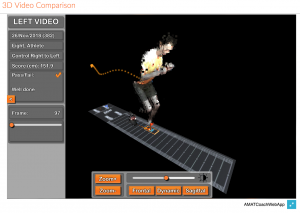 Our AMAT Performance system assesses leg asymmetry through single leg jumps for control (maintain centre of mass within base of support) and single leg maximal jumps (single leg horizontal power), but in what we feel is a more recognisable movement pattern. Single leg movements in sport usually occur in a cyclical-alternating motion where movement originates on one leg and finishes on the other. Whilst we acknowledge the value of ipsilateral hopping, we feel single leg movements using alternate legs are more representative of key athletic movements such as running. Following the screening using the AMAT system, having automatically and accurately measured the distance on both left-to-right leg, and right-to-left leg jumps, the system self-analyses and reports an asymmetry index if a neuromuscular deficit is found. This includes individualised feedback and specific training plans to attempt to address any neuromuscular imbalances, potentially reduce the athlete’s injury risk, and improve their movement skills. 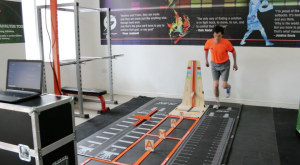 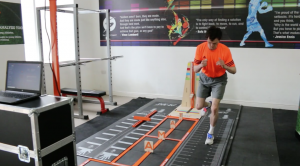 We have just demonstrated our AMAT Performance System to Dr Russ Wrigley Head of Academy Sports Science and Medicine at Blackburn Rovers FC. His comments relating to the system were excellent. He said:
1. “This is an excellent system for making the movement screening of young athletes so much quicker and more accurate”
2. “This system will save so much time for me and my staff as not only does it screen the players but it automatically creates and individualised training plan for each player”
3. “I would use the return to train function of the system on a daily basis as again it makes this process so much easier and quicker” 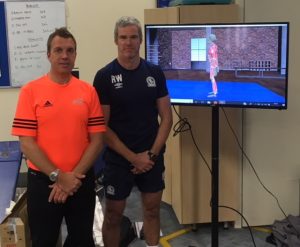